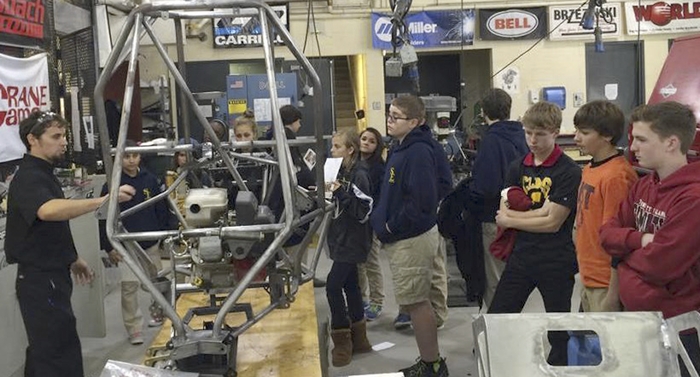 SALISBURY — Rowan County Early College students who are members of the Crosby Scholars program have spent the past week studying the impacts of technology on society.

Crosby Scholars, a non-profit organization geared towards helping students prepare for and attend college, holds “Critical Thinking Camps” once a year during the summer. The point is to get students thinking about the world around them.

The students, rising freshman through rising seniors, spent the last five days studying the pros and cons of technology and learning about solar energy, pollution and wire-tapping.

Students learned to take a problem apart, put it back together and find a solution.

“When I first got here I didn’t know what to expect because, you know, it’s a camp. It’s summer. A lot of kids didn’t want to be here,” Keshone Evan, a rising junior, said.

But during the week, Evan listened to speakers like Shawn Campion, president of Integro; Fran Koster, author of the “Discovering the New America” and Ken Clifton, an RCCC instructor who has devoted his life to clean living.

Evan said that he’s never thought about how technology could be used positively, to create change or clean up the world — instead of a simple means of communication.

“Since we have it we might as well use it for good,” he said.

He hopes that the skills he learned during the week will help him be able to give unique, well thought-out answers in his classes the coming year.

Student Jessica Driver said the speakers and the camp gave her a chance to really delve into topics. Driver worked with a group of other students throughout the week, studying the effects of technology on declining bee populations.

“I think it’s a wonderful opportunity,” she said.

Lee said she hopes it opens up new horizons for the students.

“At the end of the day, this will kind of encourage our students to think beyond the bounds,” she said.